The prestigious Wimbledon tennis tournament kicked off this past week and while rain has brought things to a halt, Canadians Eugenie Bouchard and Milos Raonic will be looking to bring this major title back to Canada. Tennis is a sport that our Toronto physiotherapy clinic recommends because it’s great for muscle-building and cardio. If you’re looking to build muscles in your arms and legs, then this may be the right sport for you. To commemorate Wimbledon, today we cover 7 places in Toronto with great courts.

Located just 10 minutes away from the HealthMax Thornhill location, the Blackmore Tennis Club is arguably the most distinguished tennis club in Canada. The Blackmore club is home to Richmond Hill’s Milos Raonic who is currently ranked 7th in the world in men’s tennis. Of course membership is required if you’d like to play at the Blackmore club however this facility has world class coaches and plenty of courts for you to work on your serve.

For those of you who live in East York, the community centre hosts plenty of summer drop-in programs. The East York courts are maintained weekly by the city and outside of the drop-in programs, the courts are available on a first-come, first-serve basis.

West-end Toronto, we have not forgotten about you guys! The courts at High Park are always well maintained and are perfect for a drop-in game. The courts operate on a first-come, first serve basis but it gets crowded in the summer therefore you may want to get there early.

The Toronto Islands courts are some of the best courts in the city because of the spectacular views of the Toronto skyline. These 6 courts are situated on the Toronto islands, which means you will have to bring a racquet on your next trip on the ferry.

Located in the popular West Queen West neighbourhood, the Trinity Bellwoods Park is home eight total courts which are some of the most popular courts in the city. With the shops, cafes, restaurants and parks, this bustling neighbourhood is constantly evolving and the tennis courts are always well-maintained.

If you’d like to find out more about how you could stay active, or would like to rehabilitate a sports injury, then please visit a HealthMax Physiotherapy Clinic near you or call (416) 431-4000. Consultations are free and our experienced staff will help restore function and create a treatment plan designed to get you back on the tennis courts. 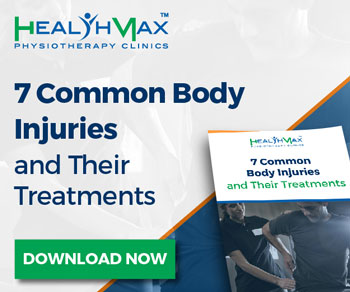